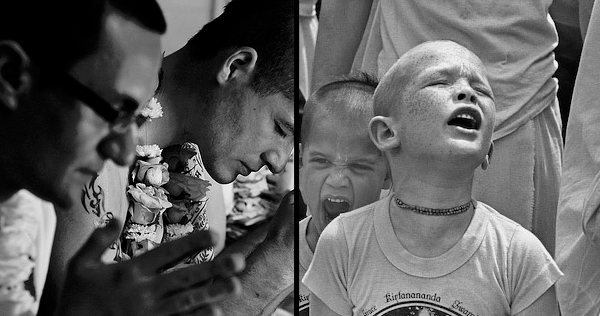 When discussing High Demand Groups, there are two basic types of members and subsequently ex-members. There are those who join a group of their own volition and those born in or brought in by their caregivers in childhood. The two groups share many experiences, but there are also distinct differences.

Some History and Definitions

Cultic studies as an academic and therapeutic field is quite new. In the United States, for example, the field arose as scores of baby-boomers joined groups like the Moonies, the Hare Krishnas, and many smaller sects of every color and flavor. This was a generation of people who joined groups somewhat autonomously. I say somewhat, as the recruitment techniques inevitably employed (often unconsciously by other converts) start to infringe on one’s autonomy from quite early on in the conversion process.

As the field grew and time went on, one of many developments was a whole new class of ex-member: the “second generation adult” (SGA). As the title indicates, these were the adults and young adults whose parents were the converts. SGAs had been subject to many of the same experiences and conditioning as their parents, but had little or no exposure to anything outside of that. For them, the cultic environment played a huge hand in their psychological and physical development from birth or very early on.

The term SGA, while still used as a matter of convenience, is insufficient for many reasons. Fundamentally, the understanding of cultic environments has evolved in such a way that far more groups than those arising in the 60s and 70s fit the bill. Within the ex-member world we find former Jehovah’s Witnesses, Mormons, Evangelicals, Orthodox Jews, Muslims, etc. Obviously members of such groups are quite often many generations in. Even within newer brands of High Demand Groups we now see third and fourth generation members. Going beyond that, it is also understood that same psychological components at play in religious groups manifest elsewhere. Businesses like Amway, hate groups, political entities, and so on can all find themselves within the purview cultic studies. My friend Zack Bonnie recently published the first in his series of memoirs showing how many “therapeutic” boarding schools in the US have and continue to function with standard elements of cultic conditioning. People like him also have some legitimate claim to the “SGA” realm, having been put into these environments against their will just like other children of groups. (For an excellent overview of experiences and issues pertaining to “SGAs”, see Leona Furnari’s Born or Raised in Closed, High Demand Groups.)

The Unique Needs of Ex-Members

Regardless of the ongoing issues pertaining to labeling and categorizing the large and diverse world of ex-membership, there is worthwhile discussion in understanding some of the differences of the two basic groups; those who joined cultic groups and those who came up in them.

While a first generation member is likely to have some traumatic or troubling elements in their past leading up to their joining a group, there is nonetheless a good chance that they came from a somewhat “normal” home within their cultural context. My anecdotal observations are that almost every person I know (quite a few!) who joined of their own accord had some component of emotional neglect, physical/sexual abuse, substance abuse, etc. in their childhood. These are the kind of trials, unstable environments, and hurdles in development that leave one inclined toward abusive environments and relationships. High demand groups are both abusive environments and composed of abusive relationships with the leader, inner circle, or other members.

Subsequently, when a first generation member exits a high-demand group, many of them have some foundational life skills, education, or social contacts to fall back on. Many of them are in effect rejoining their families and slowly picking back up where they left off. This is not to downplay the difficulty in anyone leaving a high demand group. It’s hell for everyone, and first generation members face their unique issues as well. For example, first generation members might be more devout and indoctrinated. They might have children they now feel guilt for birthing and raising in an unhealthy environment. They might have broken family relationships or have been distant during significant developments in family members’ lives.

However, a second (or third, etc.) generation member also has some very unique difficulties to grapple with. On top of having been within the cult ideology and very likely a true believer from a young age, their family environment was almost certainly made more dysfunctional by group involvement. In a cultic setting, the average members are infantilized themselves, with leaders instilling in them immense amounts of self-doubt and dependency. It’s not uncommon for a family’s finances, living situation, and parenting options to be partially or entirely dictated by leadership. We can see this in the boarding school systems established among the Hare Krishnas, which sent children sometimes under 5 years old across the entire globe, freeing their parents up for other services (often collecting funds) more pertinent to group needs. Substandard education and healthcare is not at all uncommon in High Demand Groups.

The stress of cultic environments and the all-too-common misogynistic teachings add yet more tinder to the emotional firebox of the family unit. Parents as members are constantly having pressure put on them to deliver the needs of the group while suppressing their own interests (be they financial, sexual, emotional, artistic, etc.). The resentment and tension that can build in that setting often finds its way to the children, the ones with little voice or understanding and for whom mistreatment doesn’t immediately hinder the group’s needs. Women also bear the brunt of these explosive environments. This is why we see such widespread domestic violence and rape, pedophilia, and corporal punishment within High Demand Groups. In a living pressure cooker, the vulnerable become the quickest outlet. Recently the Australian Jehovah’s Witnesses came under fire for more than 1,000 unreported but internally documented cases of child abuse over the past 60+ years. In the early 2000s, Children of ISKCON vs. ISKCON reached a multi-million dollar settlement in acknowledgment of the systemic abuses that took place in their schools.

For the second or further generation member, leaving their cultic group often means leaving, not rejoining, their family. It means leaving friends and whatever kind of support they do have in the group, however faulty it might be. It means leaving everything they have known from clothing and colloquialisms to much deeper elements of their lives; social norms, deeply ingrained attitudes about Others and the outside world, and an entire spiritual worldview. It’s not reintegration, but rather integration for the first time. It’s like being birthed into a new world with the awareness and external expectations of an adult. It’s horrifying and debilitating for many.

As I said earlier, the exit/recovery process for any ex-member is hellish, and in general, it’s impossible (and not recommended) to compare and quantify trauma, which occurs on so many subtle levels and with important details unique to each person. Add to that physiological predispositions, and we can see that every single person’s road to autonomy and wholeness is necessarily unique; just as it is in everyone’s life, ex-member or otherwise. Understanding these complexities allows us to treat each person with the necessary care and to refrain from boxing them into oversimplified categories that prevent us from connecting with them as an individual. For ex-members this can be vitally important, as they are seeking to know themselves for the first time or for the first time in a long time, having been so depersonalized while members.